Two Hoteliers who bring a glow 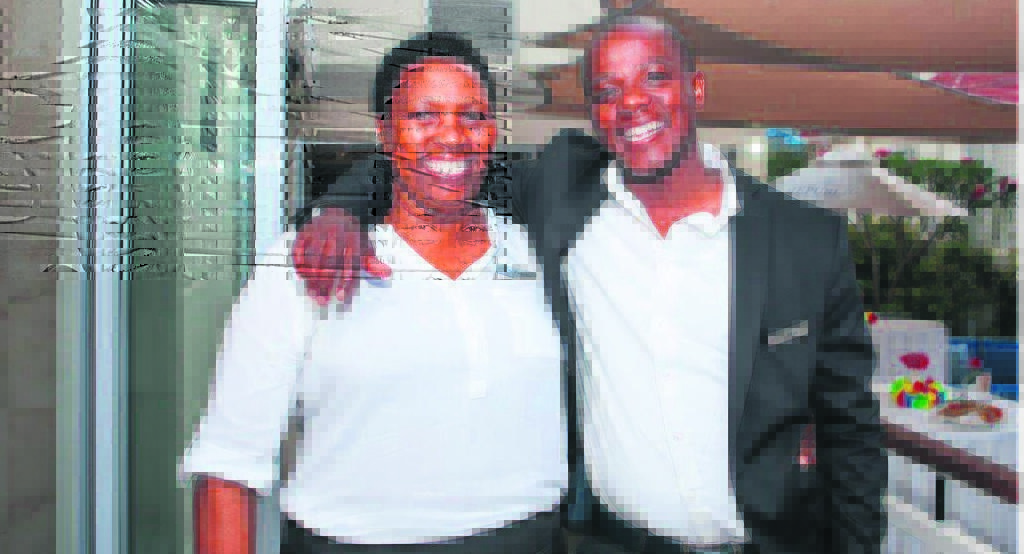 Two employees at one of Cape Town’s luxurious hotels are reaping the rewards of their dedication for delightfully serving their clientele.
Maxwell Magodla,35, is from Gugulethu. He has always been an ambitious person, hungry for growth and with a drive to have a positive influence on people around him.
He has been promoted to General Manager at the Bantry Bay Suite Hotel.
“I love people, providing excellent service and meeting individuals from all walks of life, so it comes as no surprise that I ended up in the hospitality industry,” explains Maxwell.

Maxwell describes himself as ambitious, innovative, and driven, so much so that he has completed a Hotel Management diploma at Intec College, which helped pave the way to his employment at the Cape Town International Convention Centre (CTICC), The President Hotel and Bantry Bay Suit Hotel.
Maxwell has previously won the award for ‘Long Service’– 11 years of dedication, which he now channels into Bantry Bay Suite Hotel.
According to Maxwell, the best choice he has made was becoming a husband, father and a mentor to his younger colleagues.
“It brings me joy to see people I have mentored prosper and achieve their dreams, I too was them once upon a time and I owe it to Frank Gormley (Owner at President Hotel and Bantry Bay Suite Hotel), Jeremy Clayton (GM at President Hotel) and Dr.K Booi (Pastor) for being my mentors,” he said.
When asked where he sees himself in the future, Maxwell stated that he would like to own his own hotel and assist hospitality students grow in their field.
He urges the youth of South Africa to utilise the opportunities they are presented with and always have positive attitude.

And then there is Yvonne Sigenu, who is the deputy manager at the same hotel.
Born in Keiskammahoek in the Eastern Cape, but raised in Cape Town, Yvonne Sigenu describes herself as hardworking with a love for people from all walks of life.
Through pure dedication and tenacity, she boasts with an accomplishment of the “10 Year Long Service award.”
In 1993, Yvonne started her hospitality career at the Courtyard Hotel as a room attendant after which she joined Bantry Bay Suite Hotel as a Linen Keeper in 1999.

With a keen interest to succeed, Yvonne often turned to her role models such as her mother, Diana Romberg – MD of the Rellais Hotel at that time and hotel managing partners Frank Gormley and Emily Whitefield.
Some of Yvonne’s hobbies include, playing netball, cooking for her family, and helping the elderly as she loves assisting others in achieving their goals. Yvonne believes that education is the key to success and hopes to impact those around her in a positive manner.

2018 marks 19 years of service for Yvonne at the luxury suite hotel accompanied by a well-deserved promotion to Deputy General Manager. When discussing her journey at Bantry Bay Suite Hotel, she added, “Being promoted to Deputy General Manager is my proudest moment – every day I get to do what I love by servicing guests and meeting people from around the world. I am excited for what the future holds for me.”
Favourite Quote: “Shine to those around you.”

We use cookies on our website to give you the most relevant experience by remembering your preferences and repeat visits. By clicking “Accept All”, you consent to the use of ALL the cookies. However, you may visit "Cookie Settings" to provide a controlled consent.
Cookie SettingsAccept All
Manage consent

This website uses cookies to improve your experience while you navigate through the website. Out of these, the cookies that are categorized as necessary are stored on your browser as they are essential for the working of basic functionalities of the website. We also use third-party cookies that help us analyze and understand how you use this website. These cookies will be stored in your browser only with your consent. You also have the option to opt-out of these cookies. But opting out of some of these cookies may affect your browsing experience.
Necessary Always Enabled
Necessary cookies are absolutely essential for the website to function properly. These cookies ensure basic functionalities and security features of the website, anonymously.
Functional
Functional cookies help to perform certain functionalities like sharing the content of the website on social media platforms, collect feedbacks, and other third-party features.
Performance
Performance cookies are used to understand and analyze the key performance indexes of the website which helps in delivering a better user experience for the visitors.
Analytics
Analytical cookies are used to understand how visitors interact with the website. These cookies help provide information on metrics the number of visitors, bounce rate, traffic source, etc.
Advertisement
Advertisement cookies are used to provide visitors with relevant ads and marketing campaigns. These cookies track visitors across websites and collect information to provide customized ads.
Others
Other uncategorized cookies are those that are being analyzed and have not been classified into a category as yet.
SAVE & ACCEPT

× How can we assist you today?